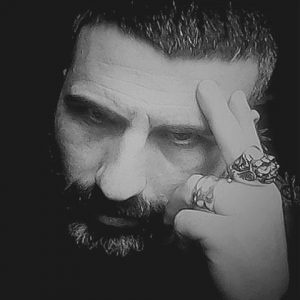 Indiano, after a childhood marked by a strong interest in music in all its genres and facets Indiano approaches the console at the end of the ‘80s starting an apprenticeship between private parties and celebrations of any kind that will take him in the early ’90s to have his first contract as a resident DJ in one of the biggest clubs in his city. In this first phase proposes in his DJ set a music selection that goes from dance to acid house. Half of the ‘90s marks a turning point. Indiano approaches the Progressive Music in which electronic sounds and melodic is a source of expression that dance music had never been able to give him. Began to offer live set featuring Dark sounds melodic and rhythmic experimental, proposing an original and innovative sound.

Thanks to the originality of his work begins an intense period of collaboration with discotheques, radio and Art Movements of his region and beyond, during which has the ability to split the console with the most important DJs in the scene Techno-Progressive of that era in 1998, by the way also to his work as a producer and released his first album “Cryptin Ep” a Tecno experimental production with Dark influences produced by Trance Traxx – Milan. In 2006 he took part in “Notte Insonne Wave National Contest”, organized in collaboration with Magazine Trend and wins in the category of new talent the jury awarded him for his technique and originality

Today is producer and artistic director of Veinet Records,label founded in February 2015, and a close associate of Arteria Music Label, which has produced hit songs like Interference, Ja Sam, New Meeting and No Future, to name a few.. He also works as a producer and remixer for other labels such as SK Records, Vike Recordings, Aki Recordings, SYNUS Records.Hoo Digital Records, 4 Quarters Music, Nero Nero Records. Tireless researcher and investigator Indiano proposes in his live set and in its productions a techno sought and never predictable, where the sounds dark and experimental are the masters.