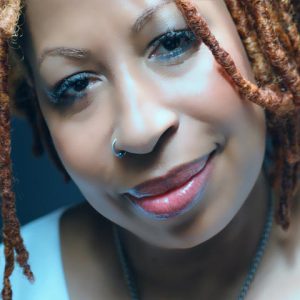 Tantra Zawadi a work of love – what Tantra-zawadi makes – what she achieves through her art, envisioning, she says, the unseen reality. A sublime soulfulness suffuses it, pungent like incense, subtle sinuous trans-formation shape-shifts as a genie might, rustled by a reedless wind. Its sizzle-cymbaled syzygy unites that, familiarly met, we thought we knew – blindness preceding a first kiss, bittersweet after – with a mastery of mood, trilled to transcendence, encouraging independence, womanly presence and voice, to embrace experience alongside others.

Comprehensive her exploration, with an awareness 360 and beyond, Tantra Zawadi addresses the world and its poetry – poet to poet, enjoined in the present, evolving, through media, traditional and new, in print and performance, on the internet and off: visualizing word for the page, spoken on stage or before the camera, shaped to accompaniment by music – never diminished. Hers is a responsibility taken on behalf of others. Whom Brooklyn began enlivens a world; Tantra the artist is now sought and received.